One Sunday we drove from the headquarters compound in Blantyre out to this church in the bush over roads (if you can call them roads) that were unbelievably rough. They would be considered impassable and blocked off here in the states. I can’t remember where it was located. God, however, knows exactly where they are.

The congregation sang and worshipped the Lord with their whole heart. It was very humbling and an honor to get to be with these precious saints of God.

Also in the picture is Missionary Flowers. He and his wife were my hosts for both of my trips and responsible for introducing me to Malawi. They are great friends. We love them bunches! (BTW, I’m on the right in the back row. Those were some of my much skinnier days.)

This is the pastor and his wife. I remember them being so glad that we came out to their church. God will bless their work and their dedication! 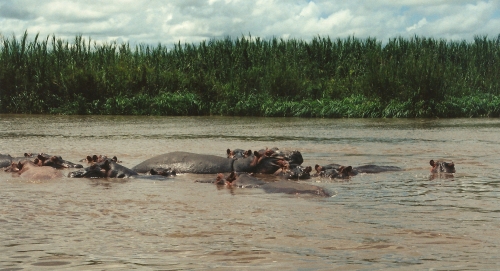 Brother and Sister Flowers (resident missionaries to Malawi at the time) took me on a water safari during this trip. It was one of the most awesome things I’ve ever been blessed to get to do. This is what hippos look like as your boat passes by them in the river. It’s pretty awesome to see these creatures out in the wild. During the night we had at least one hippo walk through the camp close by my cabin/tent. The noise of it wading through the marsh was so loud it woke me up, to say the least. I tried to get a flashlight on him, but by the time I was awake and able to get to the light, he was gone… …and I wasn’t about to go out looking for him!

These are two of my favorite photos. I took these as we were driving from Blantyre to the capital of Lilongwe. The road we were traveling ran along the border between Malawi and Mozambique. I believe these huts were on the Mozambique side of the road. You can see the children standing near the door.