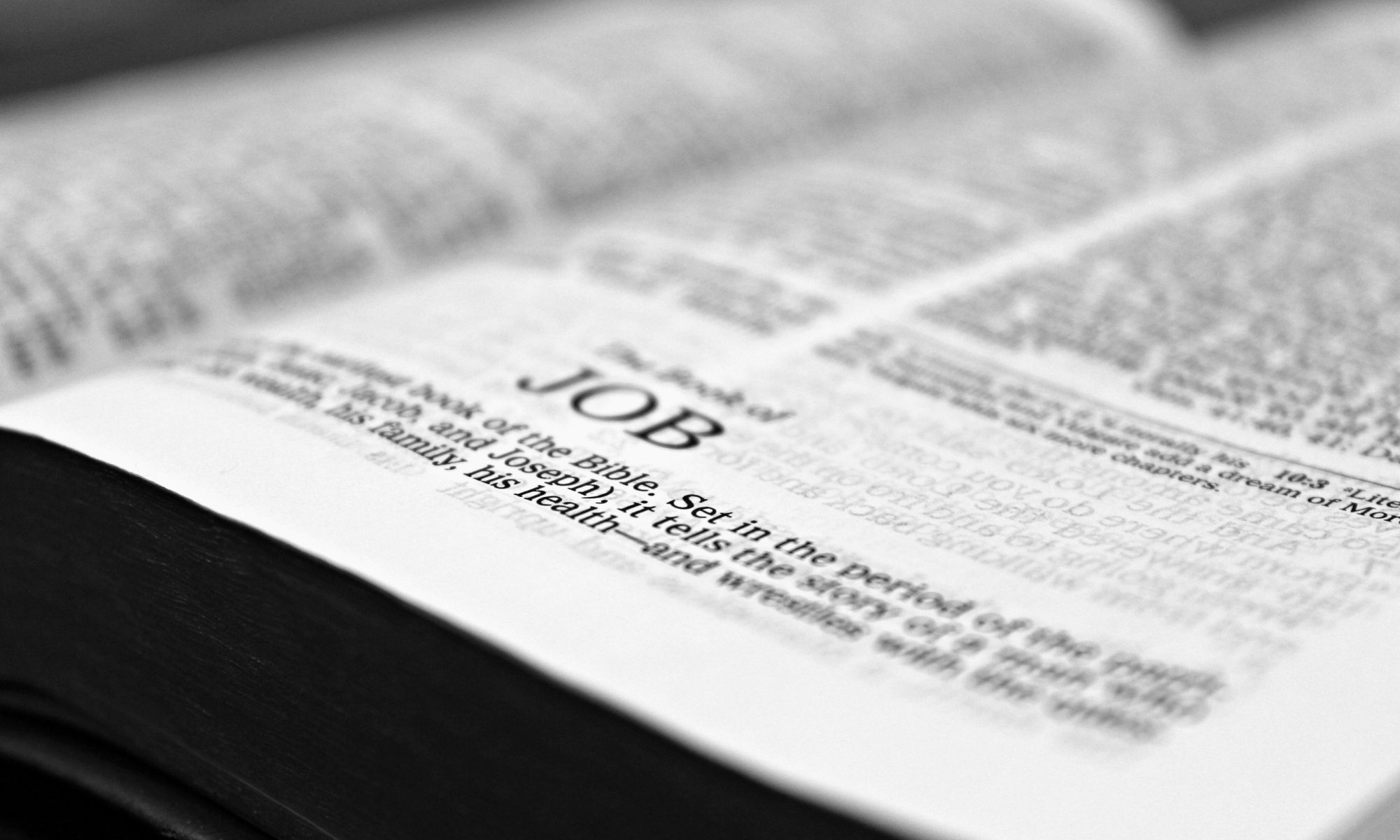 2 And the captain of the guard took Jeremiah, and said unto him, The Lord thy God hath pronounced this evil upon this place.

3 Now the Lord hath brought it, and done according as he hath said: because ye have sinned against the Lord, and have not obeyed his voice, therefore this thing is come upon you.

5 Now while he was not yet gone back, he said, Go back also to Gedaliah the son of Ahikam the son of Shaphan, whom the king of Babylon hath made governor over the cities of Judah, and dwell with him among the people: or go wheresoever it seemeth convenient unto thee to go. So the captain of the guard gave him victuals and a reward, and let him go.

6 Then went Jeremiah unto Gedaliah the son of Ahikam to Mizpah; and dwelt with him among the people that were left in the land.

7 Now when all the captains of the forces which were in the fields, even they and their men, heard that the king of Babylon had made Gedaliah the son of Ahikam governor in the land, and had committed unto him men, and women, and children, and of the poor of the land, of them that were not carried away captive to Babylon;

8 Then they came to Gedaliah to Mizpah, even Ishmael the son of Nethaniah, and Johanan and Jonathan the sons of Kareah, and Seraiah the son of Tanhumeth, and the sons of Ephai the Netophathite, and Jezaniah the son of a Maachathite, they and their men.

9 And Gedaliah the son of Ahikam the son of Shaphan sware unto them and to their men, saying, Fear not to serve the Chaldeans: dwell in the land, and serve the king of Babylon, and it shall be well with you.

10 As for me, behold, I will dwell at Mizpah to serve the Chaldeans, which will come unto us: but ye, gather ye wine, and summer fruits, and oil, and put them in your vessels, and dwell in your cities that ye have taken.

11 Likewise when all the Jews that were in Moab, and among the Ammonites, and in Edom, and that were in all the countries, heard that the king of Babylon had left a remnant of Judah, and that he had set over them Gedaliah the son of Ahikam the son of Shaphan;

12 Even all the Jews returned out of all places whither they were driven, and came to the land of Judah, to Gedaliah, unto Mizpah, and gathered wine and summer fruits very much.

13 Moreover Johanan the son of Kareah, and all the captains of the forces that were in the fields, came to Gedaliah to Mizpah,

14 And said unto him, Dost thou certainly know that Baalis the king of the Ammonites hath sent Ishmael the son of Nethaniah to slay thee? But Gedaliah the son of Ahikam believed them not.

15 Then Johanan the son of Kareah spake to Gedaliah in Mizpah secretly, saying, Let me go, I pray thee, and I will slay Ishmael the son of Nethaniah, and no man shall know it: wherefore should he slay thee, that all the Jews which are gathered unto thee should be scattered, and the remnant in Judah perish?

16 But Gedaliah the son of Ahikam said unto Johanan the son of Kareah, Thou shalt not do this thing: for thou speakest falsely of Ishmael.

1 Now it came to pass in the seventh month, that Ishmael the son of Nethaniah the son of Elishama, of the seed royal, and the princes of the king, even ten men with him, came unto Gedaliah the son of Ahikam to Mizpah; and there they did eat bread together in Mizpah.

2 Then arose Ishmael the son of Nethaniah, and the ten men that were with him, and smote Gedaliah the son of Ahikam the son of Shaphan with the sword, and slew him, whom the king of Babylon had made governor over the land.

3 Ishmael also slew all the Jews that were with him, even with Gedaliah, at Mizpah, and the Chaldeans that were found there, and the men of war.

4 And it came to pass the second day after he had slain Gedaliah, and no man knew it,

5 That there came certain from Shechem, from Shiloh, and from Samaria, even fourscore men, having their beards shaven, and their clothes rent, and having cut themselves, with offerings and incense in their hand, to bring them to the house of the Lord.

6 And Ishmael the son of Nethaniah went forth from Mizpah to meet them, weeping all along as he went: and it came to pass, as he met them, he said unto them, Come to Gedaliah the son of Ahikam.

8 But ten men were found among them that said unto Ishmael, Slay us not: for we have treasures in the field, of wheat, and of barley, and of oil, and of honey. So he forbare, and slew them not among their brethren.

9 Now the pit wherein Ishmael had cast all the dead bodies of the men, whom he had slain because of Gedaliah, was it which Asa the king had made for fear of Baasha king of Israel: and Ishmael the son of Nethaniah filled it with them that were slain.

11 But when Johanan the son of Kareah, and all the captains of the forces that were with him, heard of all the evil that Ishmael the son of Nethaniah had done,

12 Then they took all the men, and went to fight with Ishmael the son of Nethaniah, and found him by the great waters that are in Gibeon.

13 Now it came to pass, that when all the people which were with Ishmael saw Johanan the son of Kareah, and all the captains of the forces that were with him, then they were glad.

14 So all the people that Ishmael had carried away captive from Mizpah cast about and returned, and went unto Johanan the son of Kareah.

15 But Ishmael the son of Nethaniah escaped from Johanan with eight men, and went to the Ammonites.

16 Then took Johanan the son of Kareah, and all the captains of the forces that were with him, all the remnant of the people whom he had recovered from Ishmael the son of Nethaniah, from Mizpah, after that he had slain Gedaliah the son of Ahikam, even mighty men of war, and the women, and the children, and the eunuchs, whom he had brought again from Gibeon:

17 And they departed, and dwelt in the habitation of Chimham, which is by Beth–lehem, to go to enter into Egypt,

18 Because of the Chaldeans: for they were afraid of them, because Ishmael the son of Nethaniah had slain Gedaliah the son of Ahikam, whom the king of Babylon made governor in the land.

1 Then all the captains of the forces, and Johanan the son of Kareah, and Jezaniah the son of Hoshaiah, and all the people from the least even unto the greatest, came near,

2 And said unto Jeremiah the prophet, Let, we beseech thee, our supplication be accepted before thee, and pray for us unto the Lord thy God, even for all this remnant; (for we are left but a few of many, as thine eyes do behold us:)

3 That the Lord thy God may shew us the way wherein we may walk, and the thing that we may do.

4 Then Jeremiah the prophet said unto them, I have heard you; behold, I will pray unto the Lord your God according to your words; and it shall come to pass, that whatsoever thing the Lord shall answer you, I will declare it unto you; I will keep nothing back from you.

5 Then they said to Jeremiah, The Lord be a true and faithful witness between us, if we do not even according to all things for the which the Lord thy God shall send thee to us.

7 And it came to pass after ten days, that the word of the Lord came unto Jeremiah.

8 Then called he Johanan the son of Kareah, and all the captains of the forces which were with him, and all the people from the least even to the greatest,

9 And said unto them, Thus saith the Lord, the God of Israel, unto whom ye sent me to present your supplication before him;

10 If ye will still abide in this land, then will I build you, and not pull you down, and I will plant you, and not pluck you up: for I repent me of the evil that I have done unto you.

11 Be not afraid of the king of Babylon, of whom ye are afraid; be not afraid of him, saith the Lord: for I am with you to save you, and to deliver you from his hand.

12 And I will shew mercies unto you, that he may have mercy upon you, and cause you to return to your own land.

13 But if ye say, We will not dwell in this land, neither obey the voice of the Lord your God,

14 Saying, No; but we will go into the land of Egypt, where we shall see no war, nor hear the sound of the trumpet, nor have hunger of bread; and there will we dwell:

15 And now therefore hear the word of the Lord, ye remnant of Judah; Thus saith the Lord of hosts, the God of Israel; If ye wholly set your faces to enter into Egypt, and go to sojourn there;

16 Then it shall come to pass, that the sword, which ye feared, shall overtake you there in the land of Egypt, and the famine, whereof ye were afraid, shall follow close after you there in Egypt; and there ye shall die.

17 So shall it be with all the men that set their faces to go into Egypt to sojourn there; they shall die by the sword, by the famine, and by the pestilence: and none of them shall remain or escape from the evil that I will bring upon them.

18 For thus saith the Lord of hosts, the God of Israel; As mine anger and my fury hath been poured forth upon the inhabitants of Jerusalem; so shall my fury be poured forth upon you, when ye shall enter into Egypt: and ye shall be an execration, and an astonishment, and a curse, and a reproach; and ye shall see this place no more.

19 The Lord hath said concerning you, O ye remnant of Judah; Go ye not into Egypt: know certainly that I have admonished you this day.

21 And now I have this day declared it to you; but ye have not obeyed the voice of the Lord your God, nor any thing for the which he hath sent me unto you.

22 Now therefore know certainly that ye shall die by the sword, by the famine, and by the pestilence, in the place whither ye desire to go and to sojourn.